The recent introduction of chasing electroluminescent (EL) wire inspired me to give this a try in a seasonal installation:

admittedly, the sound on the video is not recorded off the installation—I overdubbed the same MP3 file the installation plays on top of the video, so the fairly soft rendition of the audio through the simple speaker I used did not detract from the majesty of the visuals and the occasion.

I noticed that so far I had never written up an EL wire project, mainly because the software generally has all the sophistication of an LED blink sketch, the hardware is 95% off the shelf (I'd rather not tinker too much with the high voltage AC current involved in an EL wire project), and my craftsmanship with the wire shaping is undistinguished. Nevertheless, I thought it was time to show how a project like this can be done.

There are numerous ways of getting EL wire to keep whatever shape you want to form it. The technique I'm using (which I may have invented; I don't recall having seen it anywhere else) is to use a tight garden mesh with holes a bit bigger than the diameter of the EL wire, and weave the wire through it: 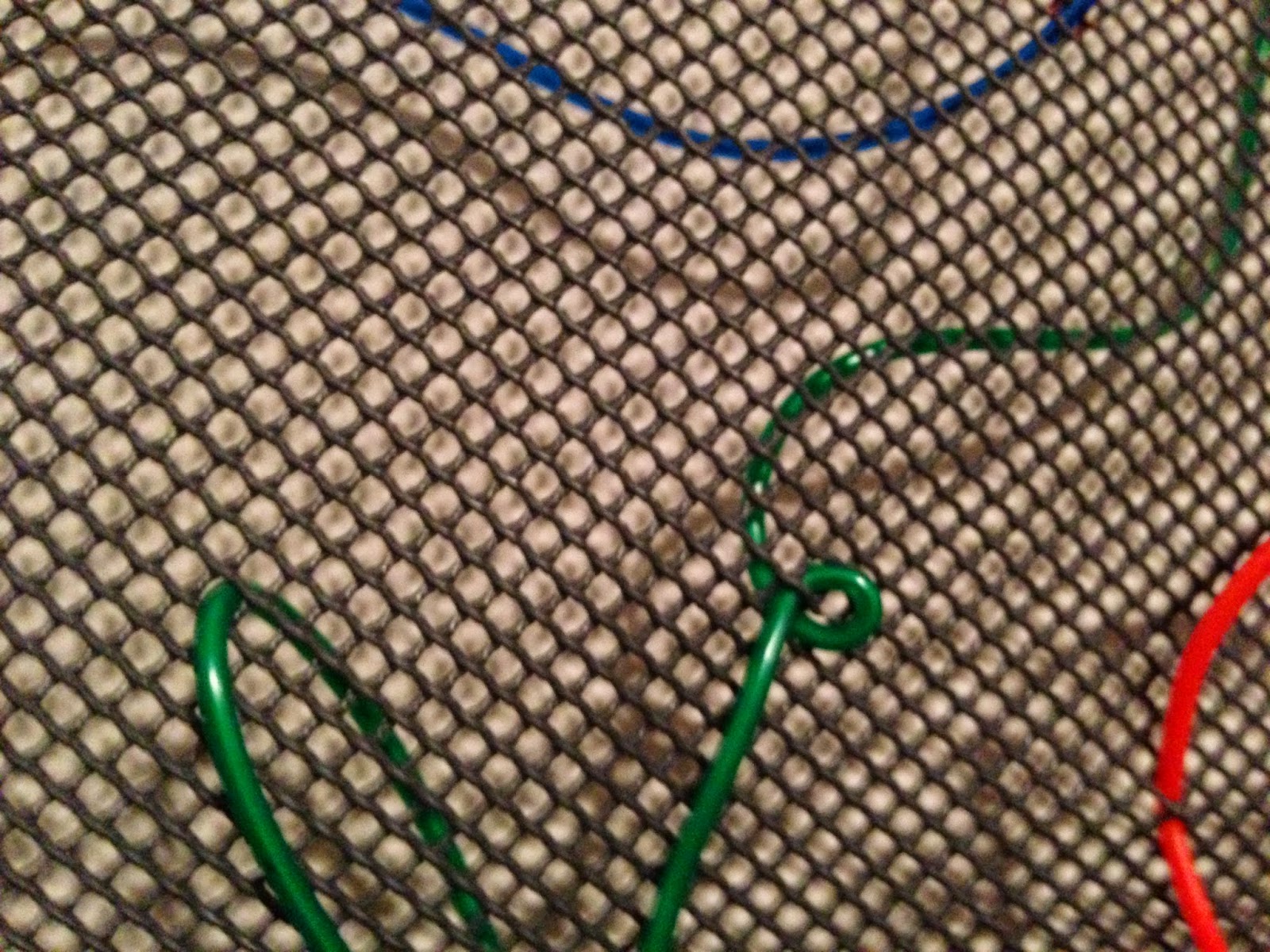 it turns out that it does not matter whether the EL wire runs on the front or the back side of the mesh: it is bright enough that it will be equally visible on both sides. EL wire can bend quite a bit, but if abused too much, it will eventually break, so my wiring tends not to be all that tight.

The EL wire I buy generally comes with a plastic cap at the end, and the mesh is tight enough that I need to remove the cap or cut off the end of the wire. I've generally not had problems with this practice, but in the new chasing EL wire, doing this seems to have created some sort of shortcut between the individual strands of wire, so I had to separate them a bit and put some electric tape around the end to fix the problem.

Basically a glorified blink sketch, as I said. Rather than synchronize line by line, or note by note, I just synchronize with the start of the song, which happens to be recorded at a fairly steady 60bpm (except for a ritardando at the end which I'm ignoring). For the chasing wire, I'm using an adapter cable using 3 channels; I do the chasing with 2 channels on, 1 off at a time, although the other way around also works, of course.

For playing the MP3 file, I used Bill Porter's very convenient MP3 shield library, so the actual code to play the file was trivial:


The synchronization is simply done by connecting the TX pin of the Arduino to the RX pin of the EL sequencer, and then sending some data when ready. It certainly could have been made more precise, but for my purposes, I thought it close enough.
Posted by microtherion at 00:22 No comments: